This project was initiated by “invisible Memphians” who asked Robert Gordon to work with DeWayne Moore, of the Mt. Zion Memorial Fund, and design an appropriate headstone to mark the grave of Frank Stokes. Moore conducted research on the life and music career of Stokes, and he consulted with the veteran blues scholars of the Real Blues Forum, specifically Bob Eagle and Alex van der Tuuk, who helped discern the earliest document that contained the birthdate of Stokes. Moore also worked with the fine folks at New Park Cemetery–Julie Levy and Hal Mandelmann–to design and install the headstone of Frank Stokes. New Park Cemetery also offered its expertise in resetting the large, thick upright headstone of Furry Lewis. 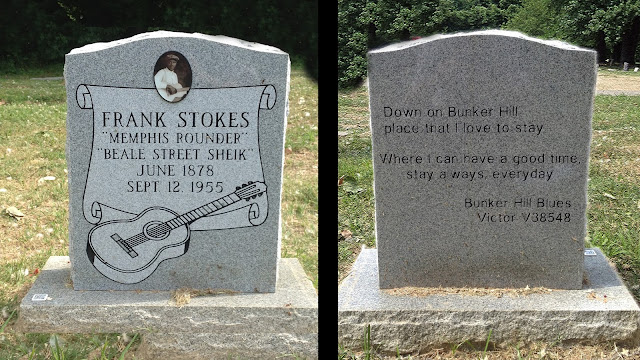 In early 2016, I had been charged with the monumental task of digging up every bit of historical information ever published and previously unavailable on Memphis musician Frank Stokes, locating his unmarked grave in the very large and abandoned Hollywood Cemetery, commissioning a fitting grave marker to adorn his final resting place on behalf of two popular individuals who wished at the time (and still do until further notice) to remain anonymous, and organizing its dedication services at the end of June. I was fortunate enough to get Memphis author Robert Gordon, legendary photographer Dick Waterman, and Stokes’ grandson Nathaniel Kent to speak at the dedication–which made the sweltering heat of the day bearable and the unveiling of the monument much more “fitting.” The personal stories of his grandson and Mr. Waterman made it more special indeed, but the surprise appearance of Stokes’ 96 year-old daughter, Helen Kent, made it almost “perfect.”
At first, however, it seemed as if I had made a grievous mistake. As more and more people gathered in the minutes before the official dedication, and I distributed programs and introduced myself to each of the excited and curious individuals who attended the event, I didn’t notice a vehicle pull into the entrance and stop in front of the veiled marker. The driver stepped out of the car, marched promptly up to me, and queried, “Are you the one responsible for this?” Standing face-to-face with Sergeant Major Carlton W. Kent, of the Unites States Marine Corps, and unable to flee in the somewhat intimidating presence of a decorated veteran with as of yet unknown intentions, I responded in the affirmative and he told me to follow him: “I have someone who wants to speak with you,” he informed, leaving me more than a bit concerned in my confusion. In the passenger seat of his vehicle sat the elderly daughter of Frank Stokes, and the Sergeant Major motioned for me to lean into the car so she could relay a message. I readily leaned over with my ear to the side, and she quietly relayed, “Thank you for remembering my father and giving him the respect he deserves. We did not always know and I thought a lot of folks forgot about him…then Nathan told me about this.” I then turned my head to look at her and a smile came across her face as she gently tapped my hand approvingly, giving me the cue to begin the ceremony. I looked back at the Sergeant Major, who, having completed his mission, now wore a big smile and extended his hand. We shook hands. I thanked him. And it was time.
Alice Waller was so excited that the mood, despite an oppressive and wet heat, remained jovial and honorific throughout all the stories and musical tributes. Davis Coen, to top it all off, stood in the back and looked on approvingly, as he was a good many inches taller than all others in attendance.
Belton Sutherland Chas. Patton